Are you passing through Palermo and only have one day to visit the city? Do not worry. In this article, I can explain the best way to follow simple itineraries to make the most of your single day here in Palermo. 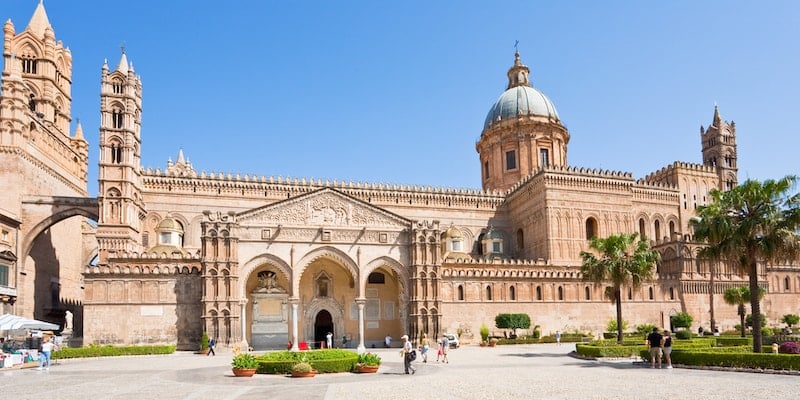 Ciao everyone, I am Don Tano Bongiorno. I am your semi-official tour guide, and I want to share the most captivating city in Europe, the beautiful Palermo, with you.

This is the first time since I have launched this travel guide that I have found myself having great difficulties.

And do you want to know why?

Explaining everything that you must do in Palermo with only one day is a very challenging task.

Palermo is among the cities with the largest number of cultural heritage sites in the world, and you will realize that visiting it in a single day is not an easy thing for you to do.

But that’s a concern for me, not for you. I have accepted the challenge to help you make the most of your brief time here.

The only thing I am asking you to do is to really pay attention to the information here. You can get good information by taking the five minutes to read this article fully.

If you are ready, so am I. Let’s get started.

Places You Will Visit During this One-Day Tour

I’m sure you already have some ideas of what might be on your one-day itinerary, with all of the attractions that Palermo has to offer.

Want to get an idea of what we can pack into a single day?

Sounds impossible, right? Get some comfortable shoes, because it is best done on foot.

You do not need to take public transport for this itinerary, and honestly, it only slows you down to use it anyway.

Well, let’s move on to the details.

I am not going to bore you with endless information, just a few suggestions.

If you really want to enjoy your time here, there are three articles that you should take a look at if you have not already.

If you take the time to read those, it will improve your visit.

Also, if you are lucky enough to spend a night in town, check out the nightlife guide.

What You Will Do in a Day in Palermo

As I’ve mentioned, there are many attractions to see in the city.

Palermo is a city with one of the largest historical centers in Europe, and I believe it covers an area of nearly 2.5 square kilometers.

I can give you the best itinerary to follow to make the most of the trip, but follow these three general rules:

Alright, let’s find out how to make it work.

You Begin at the Markets 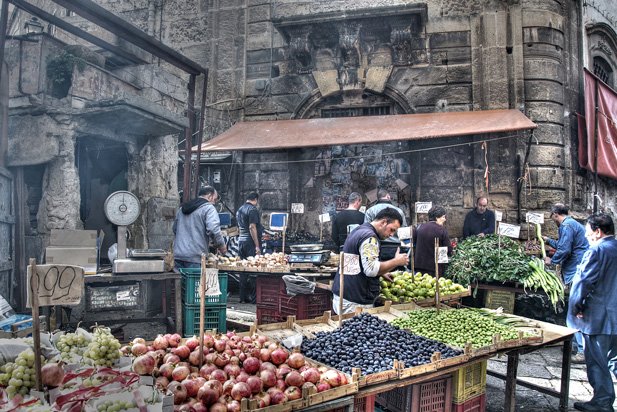 The first thing you must do is visit the markets.

No matter the direction you plan to take for the tour, consider a stroll through the historical city markets.

There are four main street markets:

Take Capo and Ballarò into consideration. They provide a spectacle to see, including an impressive kaleidoscope of scents, flavors, sounds, and colors.

Tip: Head here with an empty stomach to get to try some of the world-renowned street food.

If you are curious why you shouldn’t go to Vucciria Market (portrayed in Renato Guttuso’s famous painting), there is a good reason.

Nowadays, this is the least vibrant of all of the four markets.

That being said, it is also one of the most active for the nightlife.

At night it is frequented by tourists and local university students for its attractive location, and the bars around that serve cheap alcohol. 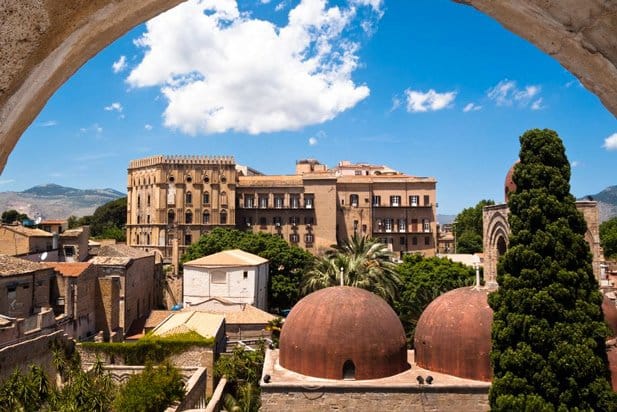 Next stop: The Norman Palace

Distance: 15 minutes on foot from the street markets

You will find that Palermo is a capital for Arab-Norman art, which is a symbol of a co-existence of different styles and cultures that found themselves next to one another between the eleventh and thirteenth centuries.

This attraction, in particular, is a great example of this coexistence.

It is possibly the most visited attraction in all of Palermo: the Palatine Chapel inside the glorious Norman Palace.

The Norman Palace still a must-see even though these days it is used to host the scumbags of Sicilian Regional Assembly.

The Palatine Chapel, built in 1130 at the behest of the Norman king Roger II, is a precious treasure chest where Latin, Arab and Byzantine elements coexist in perfect harmony.

If you can, I would recommend spending some extra time here.

It is challenging not to appreciate the mosaics from the masters who came from the East and the wonderful wooden ceiling of the central nave, decorated in Islamic style by Arab craftsmen from all over the world. 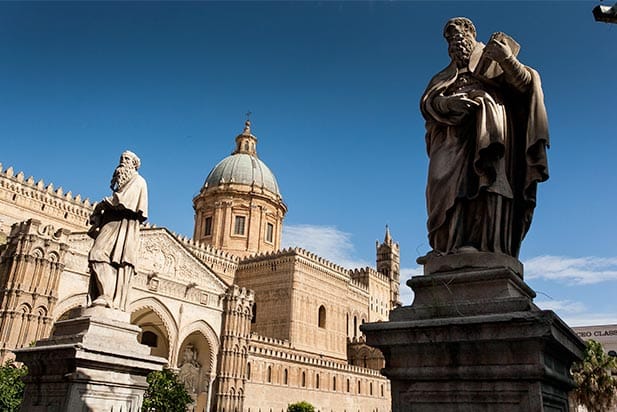 Next stop: The Cathedral

After visiting the Palatine Chapel, I would suggest you head towards the Cathedral passing along the Cassaro.

This is the oldest road in the city, dating back to the Phoenician era. Today it is a long road, lined with countless eighteenth and nineteenth-century noble palaces.

It is a remarkable sight to see.

You can pass directly under Porta Nuova, which is an ancient gate to the city that was constructed in the 16th century in celebration of the arrival of Emperor Charles V to Palermo. 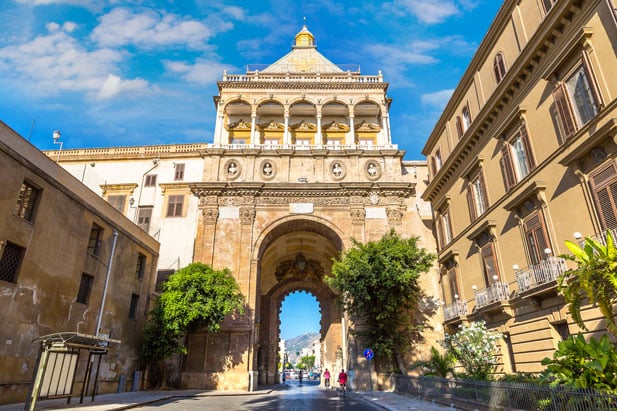 You can continue towards the sea, and after walking for a few minutes, you will find the impressive and stunning Cathedral before you.

This building has a very long and involved history.

As the city’s largest ancient mosque, it was converted to a cathedral in 1185, becoming one of the iconic symbols of Palermo.

It’s exterior is remarkable, created of warm limestone that glows with a red hue as the sun is setting.

It has been renovated many times over the centuries, but it has always retained its unique and fascinating style to this day.

Unfortunately, I cannot say the same for the interior of the cathedral.

You might end up a little disappointed by the inside of the building. It was most recently renovated in the 18th century to an unadorned neoclassical design, which is not at all alluring to the eyes.

I would suggest visiting the Royal Tombs which houses Henry II and Frederick II, also take a few minutes to appreciate the chapel to the right of the altar dedicated to Santa Rosalia and houses relics of the patron saint of Palermo.

Finally, in one of the side chapels on the left side of the cathedral, you will find the funeral monument of Father Pino Puglisi. He was a priest (now of blessed memory) who was murdered by the mafia in 1993.

Quattro Canti and Nearby Attractions 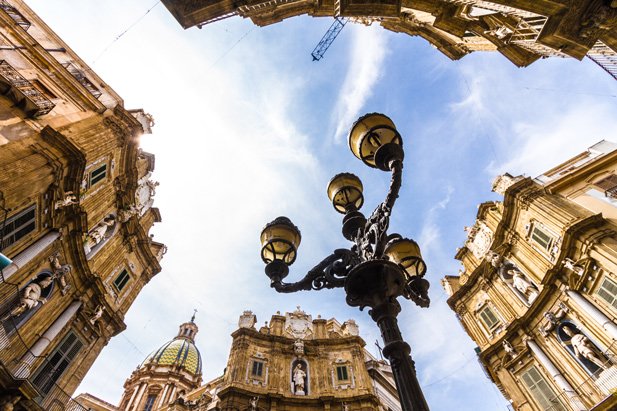 Once you leave the cathedral, you can head towards the Quattro Canti.

This is located within the walls of the ancient city. It is a crossroads between two of the main streets in Palermo: Via Maqueda and Cassaro.

During a triumph of Baroque theatricality, the Quattro Canti celebrates the royal power that subdues nature and is in turn subdued to divine power.

Now turn right, and you will find yourself in Pretoria Square.

This square is surrounded by the Town Hall, a noble palace, and two imposing churches: Santa Caterina d’Alessandria and San Giuseppe dei Teatini.

Since 1573, the square has been adorned with a sumptuous fountain featuring various rows of basins, which is accentuated with dozens of statues of mythical animals and allegorical figures.

And this fountain has a funny story behind it.

Because of the nudity of the statues, which created a scandal between the nuns of the nearby convent and the people of Palermo, the attraction is commonly known by Palermo’s people as either the square of, or fountain of shame. 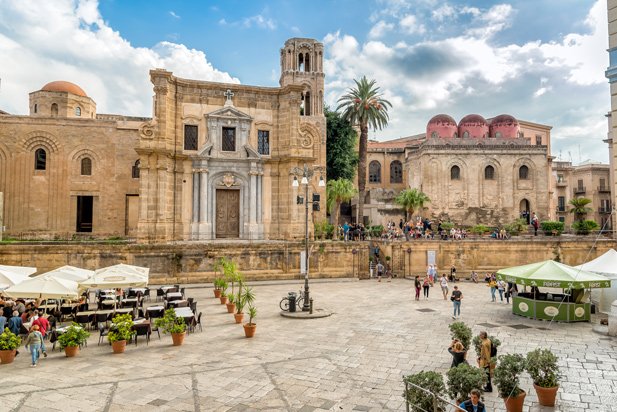 If you continue in the same direction, you can reach the Bellini Square. Here you can find two treasures of Arab-Norman art in Palermo.

One of these is the extolled church of Martorana and also the less famous church of San Cataldo.

The Martorana, which was established in 1143 with red domes, is a truly famous symbol of the city.

This is also a popular destination for those wishing to get married.

Once you walk through the Islamic-style bell tower and look, you can get awe-stricken by the charm of the small 12th-century church. Its Byzantine mosaics and Baroque frescoes/stuccoes blend together harmoniously.

Now You Are at a Crossroad

You have seen some of the city’s landmarks and your walk through Palermo from this point can take you in two different directions:

A) You can continue to go down to the sea
B) Get to the beautiful Marina Square.

If you go through the Felice Gate, you can head towards the sea, and more specifically, the park of the Foro Italico and the ancient port of the city, the Cala. 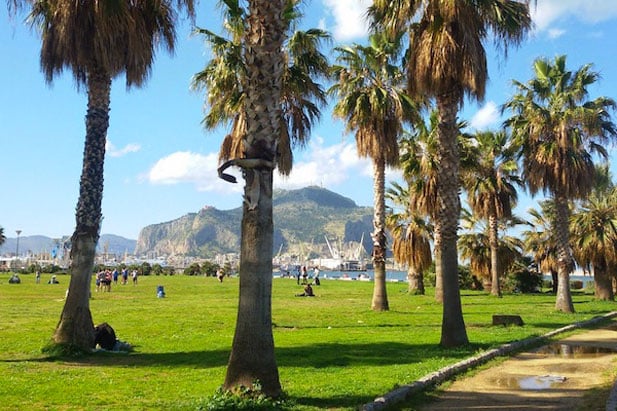 If you are more interested in seeing 19th-century art nouveau in Palermo, go up to Via Maqueda, and you can see two elegant attractions: the Massimo Theatre and Politeama Theatre. 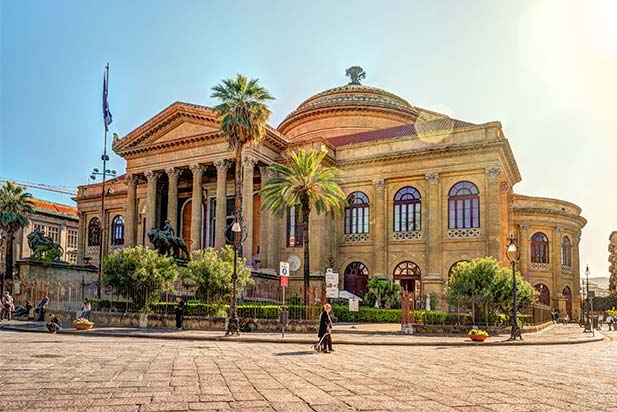 I believe I gave you the best options to experience the city in a day. If you plan to stop in Catania just for one day, I would recommend taking a look at the guide I’ve written.

If you have any questions or doubts, feel free to drop a comment below, and I’ll get back to you as soon as I can.