Ciao to all. Bongiorno! Good morning. Today old Don Tano wants to introduce you to one of the masterworks, not only of Palermo but the entire world. This is something that no visitor should miss: The Pretoria Fountain. 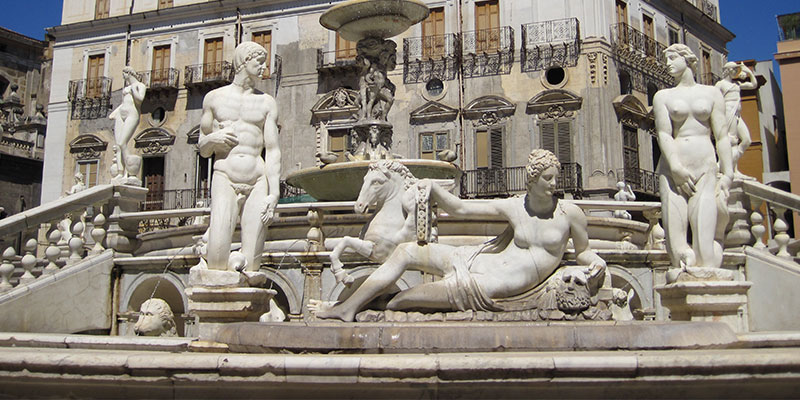 As I grow older and being retired now, I want everyone to experience and love Palermo the way I do. So that’s why old Don Tano Bongiorno has taken on the mission of telling everyone about all the beauty (and some of the ugly) of Palermo.

For the most part, this is stuff you won’t find in the typical guidebooks.

When the Eiffel Tower was built, Paris felt betrayed. The city was outraged and disgusted at that huge iron abomination dominating the beautiful Parisian skyline. Of course, today it’s the principal identification mark of Paris, of France itself. Like Big Ben, The Statue of Liberty, or the Brandenburg Tor, the Eiffel Tower has become the very symbol that identifies Paris.

Here in Palermo, when Francesco Camilliani’s creation arrived in the very heart of Old Town, alongside the Quattro Canti (Four Corners), the citizens became outraged.

We’re not gonna talk about the red light district here, but at the time, a lot of people thought it was. That’s because Don Francesco’s fountain featured a bunch of naked men and women cavorting about this fountain. But while many citizens felt violated, real art lovers insisted this was one of the most beautiful fountains they had ever seen.

Don Francesco created the statues for the Spanish noble, Don Luigi de Toledo. This Spaniard wanted to embellish the garden of his Florence estate with something outstanding.

However, in 1552, Don Luigi Toledo died and his indebted son sold the masterwork to the Palermo Senate. The fountain had to be dismantled into what became 644 pieces and transported to Sicily by ship.

Sadly, some of the statues became damaged during the voyage while the young de Toledo held some back for his own future use.

Obviously, replacement and restoration of the fountain was going to take some doing.

The Fountain of Shame

Here in Sicily, people call this the Fountain of Shame because of the nude statues. Visible from the windows of the San Giuseppe Dei Teatini church just opposite, the nuns cried and murmured, “How shameful.” that appellation became so popular that it survives even today.

But chance had little to do with the location picked by the Municipality of Palermo. A word to the wise…

Many tell us of the fountain’s amazing power. Viewers swear it seems to come to life throwing them into another dimension. As they walk past, the fountain manages to force passersby to make several turns around it, each time noticing new details, and more aspects that combined with the grace of each statue creates the distinct impression that they’re soft enough to make people want to reach out and touch them.

Fortunately, you don’t have to buy an entry ticket or worry about visiting hours. The fountain stands night and day for all to see as they come by the Four Corners.

Once you arrive at the Pretoria Square, you’ll quickly learn that all the other major monuments are within easy walking distance. This is not only interesting by you can also easily find accommodation in Old Town.

This may be of particular interest to those whose interest lies more in history rather than the noisy happy-go-lucky nightlife that brightens Palermo’s night scene.

Well, I hope I’ve given you some useful information about the Pretoria Fountain. If you have any questions or commentaries, just use the box below. I’m gonna answer each and every letter as quickly as I can.