Hello, everyone! Your Semi-Official guide and host, Don Tano is back with more interesting and informative — sometimes even controversial matters — that apparently concern tourists. You know, some people are afraid to come to our beautiful and ancient city because they have heard about the dread Mafia. 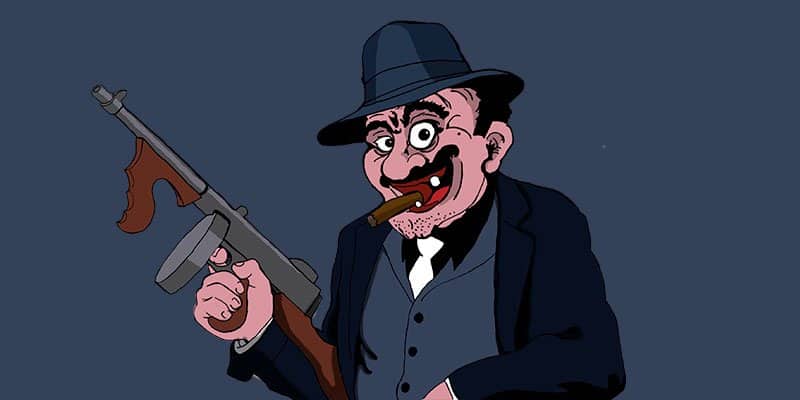 In my discussions with tourists, some told me they’re afraid to go out into the streets at night or feared that they might come back to their hotel to find a horse’s head reclining on their pillow.

They are the sort who believe everything they see in the Hollywood films, including that famous epic, “The Godfather.”

I wish I were just joking but actually, I receive a lot of emails from worried potential visitors, visitors who need some reassurance.

Well, take it from old Don Tano, after a long life right here in Palermo, I’m still alive and well, and no Mafiosi have ever bothered me, or anyone I know. I can give you my word. Breathe calmly and sleep well at night.

Every time the city of Palermo arises in a conversation, the questions arise right behind it. Is Palermo dangerous? How safe is it in the city? Well, you can rest easy and I’m gonna explain exactly why.

No matter what you may have heard, Palermo is no more dangerous than any major city, including Chicago (another city with a frightening reputation that it no longer merits).

Now it is true that the Mafia continues in existence, not only in Sicily but all over the world. And right here in my beloved city, the arrests of many bosses goes on every year.

Who can deny that? But in truth, the tourists are not at risk in the same way as the rest of the population.

The Mafia is about politics, power and of course, money. The stars of this endless horror movie are the politicians and important entrepreneurs who either fight each other or cooperate, depending on the situation, to strip our country of its last resources.

For some reason, they don’t seem to care about our environment or the future of our country. All they care about is enriching their own lives. And it is that way all over the world with people who have no respect for government, the environment, or the law.

But you don’t have to worry about gangster war in the streets. Today, the Mafia uses ridiculous laws and rules rather than automatic rifles and pistols.

I promise and assure you that you, as a tourist, are never a Mafia target. Instead, the truth is, they’re more likely to protect you and I’m gonna tell you why.

These days we live in a horrible nightmare fearing terrorist attacks by ISIS and as you already know, many European cities like Paris and London finding themselves tending victims who survive attacks and burying those who do not.

According to the latest reports by investigators, the south of Italy is probably safer than most of Europe. Why? you may ask. I’m gonna tell you why. They fear the Mafia too, and with good reason. A peek into the history of the Mafia is enough to tell you what I mean.

You can rest easy in the knowledge that you are really not likely to see either the face of a Mafioso or terrorist in Sicily. Just as in any other city you should be concerned more about small street criminals, even though in Palermo the statistics are not really alarming.

Research conducted by the ISTAT (Italian National Institute of Statistics), Palermo, among the twelve largest cities in Italy, was the city with the lowest overall crime rate. You may be surprised to learn that the city with the highest rate of crime today is Milan, followed by Bologna and Turin.

Normally you’re quite safe during the day as you stroll about our city, especially around the city center. The central Politeama and Via Libertà are safer than the Zisa and Kalsa quarters or the streets surrounding the Stazione Centrale.

And here I might add that if you are looking for the safest and best area to stay during your visit, I recommend you have a look at our dedicated page.

Okay, I admit that while the crime rate here in Palermo is low compared to many other cities that does not mean there is no crime at all. They say opportunity makes the best thief, and all over the world, opportunity is the real friend of any thief.

In the market, shoppers lay down their handbag while they check out the melons and the passing thief sees an opportunity. Mafiosi are not likely to stoop to such petty crime. Baciamo le mani!

I’m gonna give you a little story now. The expression “Baciamo le mani” (I kiss the hands), was formerly a very common form of greeting in Sicily. It was a gesture of respect and submission towards important citizens, especially if they were Mafia men.

But with all that understood, Palermo is like any other large city. You have to be aware of your surroundings and do not be tempting petty thieves by showing the world how much money or jewelry you have. Cameras and billfoldsetc. should be kept out of sight.

Women should not go out alone in the Kalsa and Zisa district, especially at night. Another area for them to avoid is the Via Vittorio Emanuele.

For younger women (sesame precautions female travelers should consider), in particular, I have either good news or bad news. It depends on your outlook. Palermo is haunted by tascios who love to whistle and call out suggestive remarks as the young women pass by.

Unless you have an interest in studying the lifestyle of some of our earliest ancestors, it is best to ignore these uncouth and ill-mannered relatives of the Great Apes. Normally, however, unless you give them a little encouragement, they are harmless, just trying to look “cool” and impress young ladies.

So as a final word, just as anyplace in the world, you have to be aware of your surroundings and the people who come near you. When in Palermo, the public transportation system is a much bigger problem than Sicilian criminals.

But hey, if you have any questions or comments, just use the comment box and I’m gonna do what I can to explain. You don’t even have to call me Mr. Bongiorno or Don Tano.

I want us all to be friends, so just call me Tano.

1 thought on “Is Palermo a Safe Place to Visit?”