Sicilians are a breed apart. Being separated from Italy by a little water, we’ve developed our own ways. Some are maybe better and some are just plain ridiculous ― at least there are those who believe that. 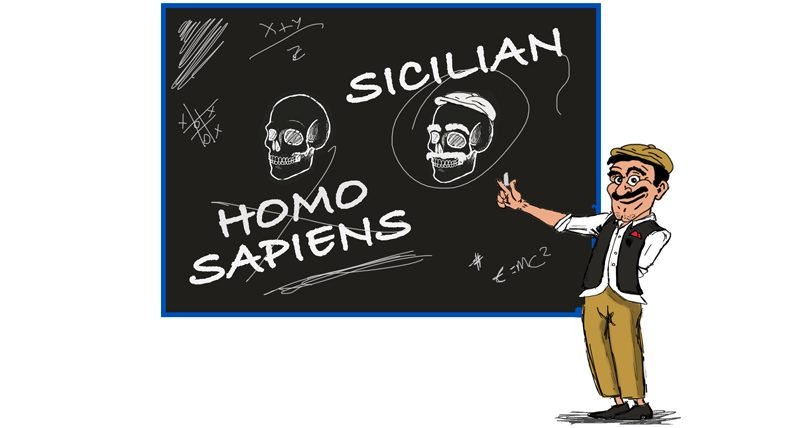 Ciao a tutti. Old Don Tano here to tell you all about these Sicilians. I’m gonna break it down into seven categories of Sicilians you’ll likely be running into when you visit Palermo.

Now, this isn’t gonna be a National Geographic article ― it’s just gonna be my personal observations that come from many years of boots-on-the-ground observation.

Today, I’m gonna talk about what I call those seven categories I mentioned.

You’re gonna learn more than that too. Here in Sicily, we have names for people. That seven category stuff is no exception.

We have names for all seven of the categories, and then some.

Once you find yourself out in the street somewhere in Palermo, you’re bound to be bumping into some of these people.

More likely, you’re gonna bump into all seven varieties ― and more than once and sometimes all in the same day!.

Now that doesn’t mean anything bad.  It’s not that they’re dangerous (well, maybe the Allazzato, but we’ll get to that later. Most of the timer you’re gonna have to laugh at some of our locals.

Now it’s probably not an exclusive Sicilian habit, but here we love to label what we see as different types. And you probably won’t find these labels in the dictionary.

We just make them up on the go.

Even other Italians don’t understand some of these and when we try to explain in a succinct way, we’re at a loss.

For example, here in Palermo you’re likely to hear someone say, “I’m gonna introduce you to Giovanni. He’s a bit tascio but he’s funny” or “Giovanni is the classic Pirocchiu Arrinusciuto”

Like I just said, even most Italians wouldn’t understand, so you’re not alone.

For us, words like that evoke an immediate picture of that person in exact detail so we know just what kind of person Giovanni is before we ever see him.

For others however, all that might seem pretty complicated.

But not to worry! Old Don Tano is here today, not to give you another guide to some aspect of Palermo, but to put on my old teacher’s hat and give you a language lesson you can’t get anyplace else;

There’s simply not room enough here to try to list every sort of idiosyncrasy that you’re likely to run into down along the beach or in some little bar.

But as time goes on, I’ll add a few more and if you keep following Don Tano’s articles, pretty soon you’re gonna sound and act like a real Siciliano! 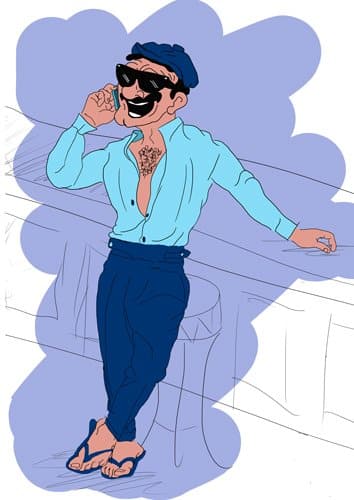 First, there’s the Toco is a mythological character that once represented a Sicilian deity. Today, he’s the flashily dressed suave creature who only hangs out in exclusive clubs.

In front of the astonishment of the long line of people who are waiting to get in, the bouncers part the crowd like the waters of the Red Sea to open a path for him and his entourage.

He has a ‘crew’ of women and men who follow him like a flock of sheep following their shepherd and he’s always bored.

While drinking or dancing, smoking a cigaret or flirting with every hot chick that passes by, he never puts down his phone. Its glued to his ear as if he’s making important financial deals twenty-four-seven.

He’s the Man, the big Kahuna, el Mero-Mero. His life partner is one, nobody and all because he’s the Toco, the Love God who loves every girl especially the hot chicks and he can never disappoint.

Nobody knows for sure just what he does for a living despite his presenting himself as a lawyer, an entrepreneur or some vague and mysterious job that he can’t take the time to explain.

Another mystery is that no one can figure out how he finds time to get around to all the big Sicilian night-life events, considering that he’s always on the phone making deals.

This can only be explained by the knowledge that the Toco is a God and has the gift of ubiquity, or perhaps  ― after all, he’s just a rich spoiled mommy’s or daddy’s playboy. 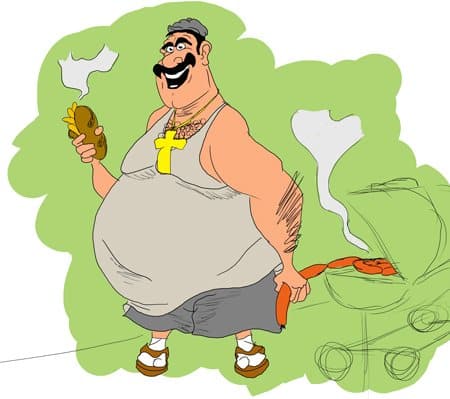 Then we have the Totuccio.

This is a guy who proudly wears a white tank top plastered with the week’s dining menu as if it was a Pollak masterpiece.

He’ll have a hanging belly and shorts that feature a big crack in the rear. He wears dirty white socks and open slippers.

And if that isn’t enough, he sports a heavy gold necklace over a mass of black hair and on his pinkie, he’ll have a gold ring.

This guy can usually be seen anyplace where you can binge.

Early, he’ll be hanging around a Meusaro ― that’s a peddler who sells pane con la milza ― and a little later he’ll be chatting and eating with a Stigghioaro ― another peddler, this one a peddler selling Stigghiola.

Then it’s a peddler selling Panellero, a peddler who sells pane e panelle. By lunchtime, he’ll be enjoying some barbecue and by three in the afternoon he’ll be back to the stigghiolaro. He’s especially visible during the summertime.

Then, around the Happy Hour,  a visit to the Polparo, a peddler who sells octopus, is seldom to be missed. He’ll pass the evening reclining t on a deckchair just outside the front door of his house (and next to the frozen melon and Babbaluci –boiled snails). 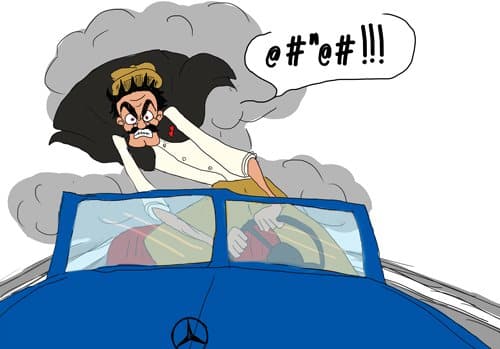 This is the dangerous guy I mentioned. He’s your typical Sicilian driver who can’t read.

He zips through the city, honking his horn as he blazes through cross streets with his blown muffler making him sound like a Rafale taking off.

This produces the Moses Effect: The traffic parts in deference to this guy. That’s not out of respect but for fear of getting killed before dinnertime.

If he does stop for a red light, his foot is on the accelerator gunning the engine until the light gurns green. Then he’s out of the box like a racehorse but with a lot more noise.

He can usually go from zero to sixty in two seconds. 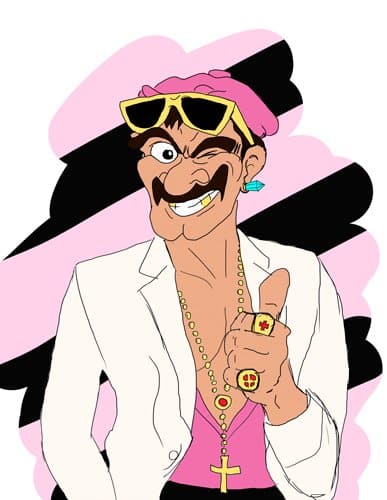 I think you could best translate this as something like a “self-made louse”. I know that may be confusing, but let me explain.

This guy is a tascio with bells on.

One who comes from a very humble family who somehow under questionable circumstances, has managed to climb a little higher on the social ladder.

He is very conscious of his ‘look’ and you can be sure he’ll be wearing every possible luxury that any one person can possibly wear at one time.

And daily he literally infests magazines and TVs, but despite all his efforts, that’s about as far as he ever got.

No matter how much money he has on his back in clothes and flashy gold Rolexes and pinkie rings, his origins and manners follow him wherever he goes as a reminder of his real roots. 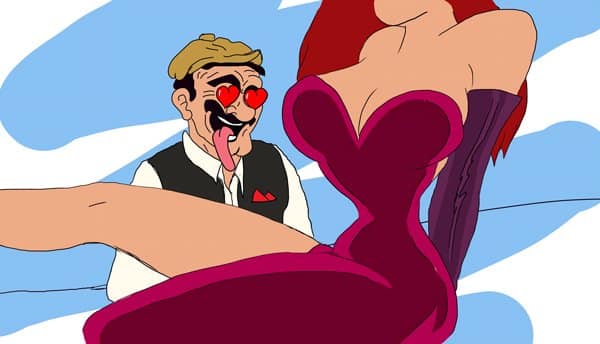 This one applies mostly to the females in Sicily.

She’s a gal who pheromones every time she passes a guy who can really tell. Aside from the fact that she doesn’t let go, as if her private areas are locked down in a chest thrown into into the Mediterranean.

This is a smell that drives the average Sicilian to insanity.

In a way, it changes his visual perception of reality and destroys any objectivity he may have thought he had.

Menaced by the this profumiera’s overwhelming temptations, he overlooks her real look and he’s stuck until hi finds that damned locked chest and the key to go with it. 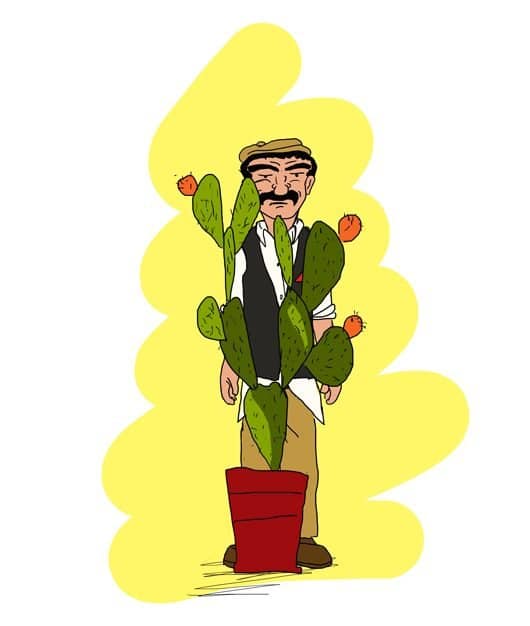 This one is an extra-Sicilian life form despite the fact that some Sicilian blood may flow in him. That blood turns to water in his attempts to avoid any physical or social contact at any time.

This bozo is a creature that’s trying to survive in a land there the Sicilians live.

But these guys can’t express their warmth and sociability and touching you  – especially older Sicilians with which you have a family relationship.

When this bird is forced to share his precious living space with others, he’ll camouflage himself by wearing clothes that mimic the colors of his home in the hope that nobody will notice his presence. 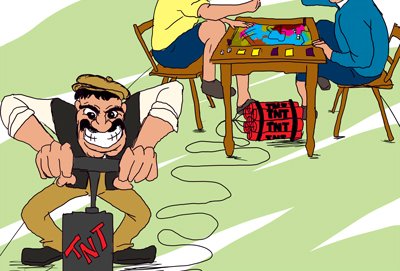 Scunza locu may best be translated as one who ruins games for everyone.

Since God forgot to put a sense of humor in his DNA, this person loves to throw a monkey wrench into any fun activity. He does this through his actions affecting those who are trying to enjoy themselves.

His apparent mission in life is to be the biggest pain in the ass on earth.

And just in case you wonder, he loves to mark his victims.

If you have any questions, comments or anything at all you want to ask me, feel free to use the comment box below and I’ll get back to you when I return tonight from the bancone – if I don’t come home and fall asleep right away.