You are here: Home / News / Lattarini: A Visit to an Authentic Arabian Street Market

Here old Don Tano will speak about the Arab Lattarini Street Market which is located at the heart of Palermo Old Town. 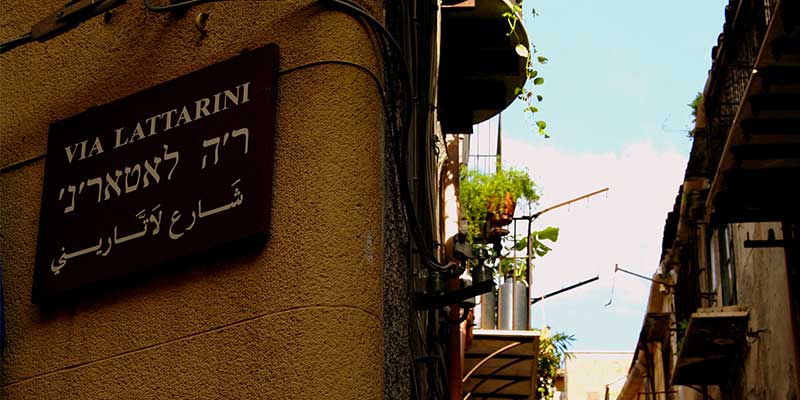 Sometimes I like to mingle with the crowds in the old Arab Lattarini Street Market. What a marketplace! You want it, they got it. They don’t got it, you don’t need it.

This street market located in Palermo’s Kalsa District has been here forever. Originally it was an Arab souk. Its name then was Suk el Attarin — spice market. For many years this old Arab marketplace was best known for the sale of spices and drugs.

Later the Arabs began selling other products, notably perfumed goods which they imported from countries of origin and planted on Sicilian soil.

Perhaps it’s only a coincidence, but the Souk el Attarine in the Tunisian Medina has almost exactly the same name. And this is a place where perfume and beauty products are the principal trade products.

Palermo’s local Lattarini street market starts at Sant’Anna Square and spreads out into some of the adjacent streets.

These days, sellers of spices and perfumed products have had to move over. This finally gave more space in order to allow merchants to set up shops and stalls that offer clothing such as work outfits.

But that isn’t all.

You can find rope, camping tents, and curtains. If you’re a tailor or just like to sew, this is a great place to find buttons and everything you need to sew them on. Sicilian hats are popular and in addition, this old market offers a great deal more.

By the way, old Don Tano here always wears what foreigners call a Sicilian Hat. It’s really a cap, but it’s what everyone calls the traditional Sicilian hat.

Well, like everything else in the world, nothing stands still forever. The old neighborhood has survived many changes through the years, but somehow the market has managed to hang in there and it’s still a popular shopping street.

Tourists enjoy it as well and often find souvenirs, such as the famous Sicilian Hat, to take back home with them.

An aside from Don Tano: These caps can be worn by women too. They look great on anyone.

The Arab Lattarini Street Market is within easy reach from Via Roma Street, one of Palermo’s main arteries. And the market is open every day.

Take a look at the others four ancient markets.

Don Tano here signing off until our next visit. As usual, I’m gonna invite you to write with any comments you may have.

Grazie mille for your interest.

How to get here

What to See in Palermo

What to Eat in Sicily

We Are Palermo is your new, somewhat different travel guide to the city of Palermo. Everything you’ll want or need to learn about Palermo and getting around the city is there for you. Like most large cities, Palermo has both strengths as well as weaknesses. We’re sure you’ll really enjoy what we tell visitors is the authentic “Sicilian Experience”. Read more about us

How to Celebrate New Year’s Eve in Palermo

SEE MORE NEWS FROM OUR BLOG

Wearepalermo.com @2020. All right reserved. | No part of this site may be reproduced without our written permission | Disclaimer and Privacy.

Wearepalermo.com @2020. All right reserved. | No part of this site may be reproduced without our written permission | Disclaimer and Privacy.

Facebook Youtube Envelope
Scroll Up
We use cookies to ensure that we give you the best experience on our website. If you continue to use this site we will assume that you are happy with it.Ok